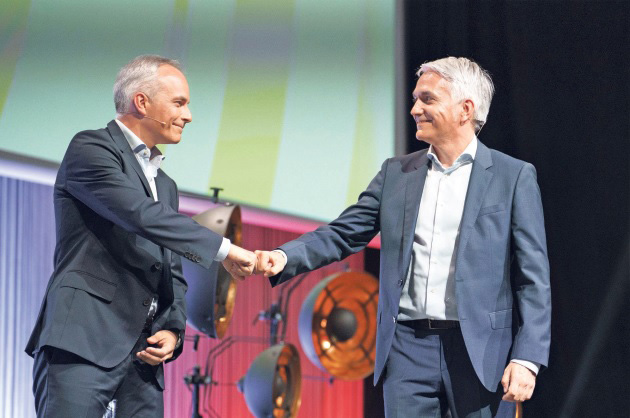 The two brothers Haegeli, Patrick (left), and Olivier, co-directors of Willemin-Macodel, have something to be proud of. The SME from Delémonte received yesterday in Lausanne the prestigious 2020 SVC Suisse Romande Award.
And it’s even a Jurassian double since the watchmaking group Richard Mille, in Les Breuleux, takes the second place. Great recognition for regional know-how.

The Jura in the front ranks! Last night in Lausanne, Willemin-Macodel won the prestigious SVC Award for innovation.
In second place, we find… the Breuleux Richard Mille brand.
The image is strong. During the call of the two finalists, the scene is almost only occupied by Jurassians. «I assure you that there is no cheating. It is a pure coincidence if there is such a representation of people from this canton», smiles the Jurassien Valère Gogniat, journalist at Le Temps and presenter of the ceremony at the Federal Polytechnic School of Lausanne.

The Jura at the top of SVC Award

It was the party for the little township. Even if Jura’s companies are not necessarily the ones that are first mentioned when thinking about the Romand economic fabric, they are indeed at the forefront. Willemin-Macodel won last night the first prize of the Swiss Venture Club (SVC Award) for French-speaking Switzerland, which is awarded every two years. Right in front of… Richard Mille. The two Jura companies beat Infomaniak, the Groupe Boschung, and IMTF in the final in Geneva.
Each one has received an award, often from entrepreneurs traveling to other continents, but the SVC award – an association that brings together personalities from economy, politics, or culture – is above all symbolic. It rewards model companies according to many criteria, including innovation, said Isabelle Harsch, President of the jury.
Until then, the Jura had distinguished itself in this prize, for which the jury visited the companies, thanks to Preci-Dip Durtal, first in 2006, and Bélet SA, nominated in 2016.
The prestige brand is therefore now for Willemin-Macodel, a world leader in the development of industrial machine tools and offering tailor-made machining solutions.

But when the brothers, co-directors, and son of the founder Blaise Haegeli, Olivier, and Patrick learn the news about SVC award victory, they soberly settle for a fist «check» to congratulate themselves. A simple gesture that illustrates the company’s culture quite well, according to the jury. They have been seduced by this family, which has managed to ensure a successful succession and established in the company «a culture of humility and quality», notes Xavier Paternot, jury’s member.

This transmission of know-how is found rather surprisingly in the second-ranking company, the independent brand Richard Mille. Proof that the new generation is able to take the reins, is Cécile Guenat, daughter of the co-founder Dominique, who yesterday represented the group of Breuleux

The independence of the brand, which has been able to focus on the very high end and find its own market has clearly been an advantage in the quest for success. «We are very free. We only have the constraints that we put on ourselves. It’s a plus and it gives us the opportunity to be very innovative», says Cécile Guenat, Creative and Development Director. The Jura entrepreneurs were thus able to enter Lausanne last night with a guarantee of quality. The occasion to celebrate, but not too much. «We expect to get back to work tomorrow», smiles Olivier Haegeli. Innovation is not waiting.

– Olivier Haegeli, what does this award mean to you?
It’s a reward for the entire company and the employees. It’s a recognition of their work. We will see how we can share this award with our collaborators. We managed to convince a jury of professionals. This is the signal that we are working in the right direction. It’s a great reward. This makes us a little better known, at Romand level, at SMEs level.
– Contrary to some observers, the general public is not necessarily aware of the excellence of Jura companies. Are we not having a little trouble selling ourselves?
Come on… I’m going to be a little provocative. Switzerland lacks curiosity about what’s going on here. There are really nice things! The idea that industry is not necessarily a source of innovation sometimes circulates, but that is absolutely false. There is a lot of innovation behind the doors of many Jura companies. We are proud to be among the two finalists with Richard Mille, a prestigious Jura company. We are proud to be Jura. Businesses are humble, family-run, and work is an important value to them.
–  There is bullying and high competition in the machinery Industry. Does it still have a future in Switzerland?
We must not consider that an industrial machine tool is just a machine. These are very high-value-added products with very innovative solutions. The machine is part of the solution. Now they are automated, robotic, connected to servers. The famous 4.0, digitalization, automation are terms that are part of our daily life. We have a future in our region and in Switzerland as long as we maintain acceptable framework conditions.

Industrial machine design, one of the secrets behind the innovation that seduced the jury

Innovation is not only a positive element for the production or the economy of a company but, above all, the ability to evolve to keep up with the times or even to anticipate them.

Willemin Macodel has been judged and awarded also for his longevity and now we are going to discover one of the secrets behind its capability of, not only survive, but even distinguish itself during the years: the propension to innovation.

In this sense, the two Haegeli brothers, Patrick and Olivier, have found their strategic ally in Enrique Luis Sardi, founder of SARDI who, with his team of designers, has been working for years now alongside the team of engineers of Willemin Macodel, designing with them increasingly innovative industrial machine design and strategic design that allows them to stand out within the offer of the current market.

The valley at the heart of the watchmaking boom