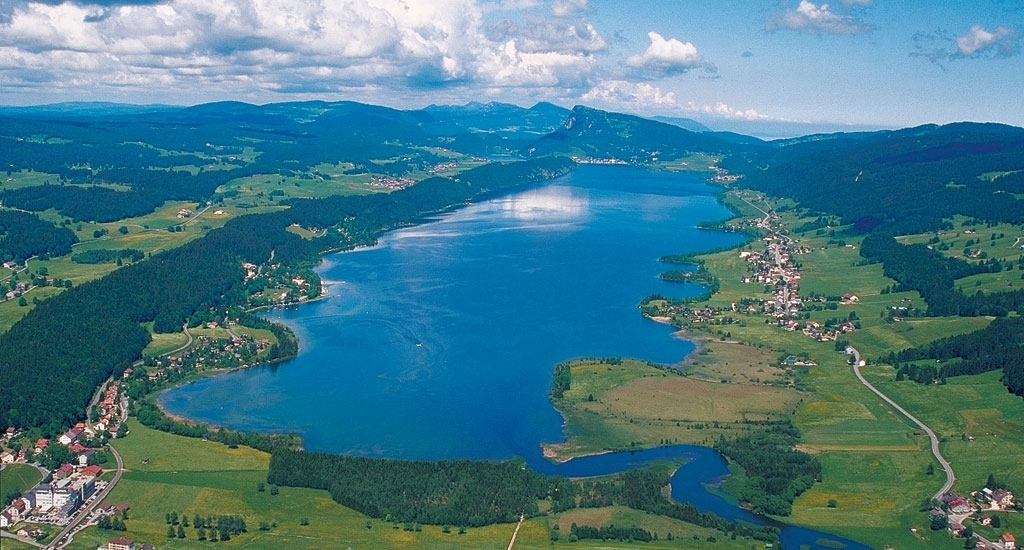 The Joux Valley in northwest Switzerland, the cradle of high-end watchmaking, now generates more jobs than the number of local residents. swissinfo.ch explores the little-known outerlying region whose economic success is assured by French labour.

From the sleepy town of Vallorbe the small Joux Valley train winds its way through picturesque pastures, stopping off at hamlets from another age. Each side of the valley is covered by dense banks of conifers. Sitting at around 1,000 metres altitude at the far western corner of canton Vaud, this remote region is also known as the Vaud Siberia for its harsh winters.

At the end of the small Joux Lake, the commune of Chenit is the centre of the region’s industrial activity. Here well-known luxury watch firms like Audemars Piguet, Jaeger LeCoultre, Vacheron Constantin, Breguet, Blancpain, Patek Philippe and Breguet have set up workshops to produce or assemble watches.

Welcome to the home of the Swiss watch industry. Here the gross domestic product per inhabitant was registered at over CHF100,000 ($114,000) in 2006 – the equivalent of canton Zurich.

“We are one of the five most dynamic regions in Switzerland,” proudly declared Eric Duruz, head of economic promotion for the Joux Valley.

The boom in the Swiss watch industry – a record CHF22 billion in exports in 2013 – driven by emerging markets’ taste for luxury products has had a huge impact on the region. The value of production has tripled in a decade and over CHF100 million have been invested locally.

The watch firms are obliged to attract workers from abroad to keep business ticking over. Most cross-border workers live just five kilometres away in neighbouring France and some 4,000 commute to work in the valley every day.

“The new cross-border workers come from much further afield, from Brittany, Bordeaux or even the south of France. It’s easier to get someone to come from Paris than from the Lake Geneva region. The Marchairuz and Mollendruz passes [in the Swiss Jura hills] are almost like insurmountable psychological barriers,” said Chenit mayor Jeannine Rainaud-Meylan.

Duruz is convinced the valley’s healthy economic development also benefits the neighbouring Franche-Comté region in France. Complaints from French mayors about Swiss firms “pillaging” their technical colleges are a thing of the past.

“All these workers who earn a good living in Switzerland are keeping this entire outlying French region alive,” he added.

Although the coexistence between locals and longstanding cross-border workers is fairly harmonious, the newer ones are not viewed so favourably.

“As they go home every weekend their involvement in local life is inexistent. The only thing they are interested in is the monthly Swiss salary which is two or three times higher,” complained two French cross-border workers from the Franche-Comté in front of their Swiss watch firm.

At the same time, the Joux Valley residents have not been forgotten by the watchmaking firms, said Rainaud-Meylan. Unemployment stands at only 2% and the Chenit mayor says she has heard of very few cases of salary dumping in the region.

In his offices at Le Sentier, union official Noé Pelet from Unia is more circumspect: “Sure, apart from firms that don’t have collective wage bargaining accords, you can’t really talk about salaries being undercut. But having Swiss and cross-border workers competing for jobs leads to tremendous pressure on wages.”

Pelet highlights the example of workers with over ten years’ experience who earn less than CHF4,000 per month, while “some watch firms have turnovers of CHF1 million per employee”.

On February 9 residents of Joux Valley turned down the rightwing Swiss People’s Party’s initiative to curb immigration and reintroduce quotas for foreigners. While he agrees with those who voted in favour, Duruz said the economic development of the region must be better controlled, reducing the problems as far as possible.

The most evident problem concerns the transport situation. Many locals complain about the twice daily streams of cars carrying cross-border workers that clog up the narrow valley roads. In response the local authorities and firms have tried to improve things by creating car-sharing and bus schemes. The cross-border train between Pontarlier and Vallorbe was also relaunched last year.

The actual consequences of the anti-immigration vote remain unclear, but they are a source of anxiety for many local employers.

“It’s a shame that working conditions will deteriorate, especially at a time when everything is going so well,” said Duruz.

At Unia half of all members are cross-border workers.

“Our members are not too worried. They know perfectly well that the big watch companies will ask for worker quotas and get them. But this vote won’t improve the working conditions, neither will it help redistribute the fruits of the watch industry growth,” said Pelet.

In the Joux Valley people are clearly delighted that the villages of Le Brassus or Le Sentier [which merged to form the commune Chenit] are now known by watch fans in places like China and Japan, but the enthusiasm stops there. The watch industry crisis of the 1970s, which hit the region hard and led to the exodus of 2,000 residents, is still in the back of many people’s minds.

But it’s difficult to avoid this “watchmaking monoculture”, said Rainaud-Meylan: “We tried to set up an industrial zone to attract small and medium-sized firms from other sectors. But all those that set up here are linked in some way to the watch industry, attracted by the presence of the major brands.”

Other more critical voices can be heard denouncing the “miracle claptrap” and the huge amount of money invested in communication and the exploitation of the Swiss-made label to the detriment of overall quality.

“The annual results of the big watch firms are dictating the direction and the manufacturing processes come second,” said Vincent Jaton, director of the Joux Valley Museum of Watchmaking . “A growing number of consumers are unhappy with these products sold for several tens of thousands of Swiss francs which really do not meet expectations.”

A watchmaking expert from the region echoed this: “When foreign visitors arrive they are only shown around the part of the factory where people still work by hand. On the other side it’s total industrialization with workers on a production line repeating the same gestures all day long. By continuing like this these firms are taking a great risk for the region and for the entire Swiss watchmaking industry.”

By Samuel Jaberg (translated from French by Simon Bradley)

The valley at the heart of the watchmaking boom