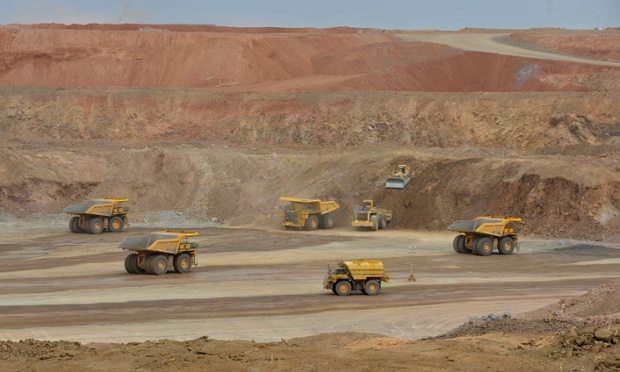 The proposal from Ivan Glasenberg that has electrified the mining industry began as a friendly telephone call, South African to South African. What, asked Glencore’s chief executive, would Jan du Plessis, Rio Tinto’s chairman, say to a merger between the two companies?

Glencore-Rio Tinto union still a prospect- For months the sector has been awash with gossip about what might be Glencore’s next move, a year after it swallowed Xstrata in mining’s biggest ever deal. Now we know: Mr Glasenberg is eyeing the creation of “GlenTinto”, a $160 billion (CHF153.5 billion) resources giant that would rival BHP Billiton as the must-own stock in mining and commodities trading.

Glencore’s informal approach – manifested in Mr Glasenberg’s July phone call – was treated very seriously by Mr du Plessis, who put the merger proposal to Rio’s board. It was unanimously rejected, and Glencore was informed in August, Rio disclosed late on Monday.

Glencore said on Tuesday it was no longer actively considering a Rio merger, and under UK Takeover Panel rules, the Swiss company is, in effect, barred from making another approach to the UK group for six months.

Yet no one in the industry thinks Mr Glasenberg will give up on the idea of a merger between Glencore and Rio – July’s phone call could just be an opening skirmish. “This is likely just a shot across the bow . . . we expect Glencore to play the long game with any highly desired acquisition target,” says Tim Huff, analyst at RBC Capital Markets.

At a time of fading returns and waning investor interest in the mining sector, virtually all of Glencore’s large rivals are trying to shed assets and prepare for leaner times – an approach exemplified by BHP’s unbundling of assets acquired at the start of the natural resources boom.

Capping career
Only Mr Glasenberg seems able to row against the tide in considering ambitious deals. A merger between Glencore and Rio would cap a remarkable career since he began in the industry about 30 years ago on the coal desk of Marc Rich & Co, a trading house.

There are more prosaic reasons for Mr Glasenberg’s interest – namely iron ore, the vital ingredient in making steel. Rio is widely acknowledged to have the best iron ore assets in the business; by contrast, Glencore has a small presence.

Given Rio’s 20% share of the seaborne iron ore market, and lucrative trading opportunities, “it is not surprising that Glencore wants to expand into this commodity”, says Jim Milligan, global resource strategist at Olivetree Securities.

Furthermore, as Glencore has proved with its acquisition of Xstrata, it can generate value by putting mine production through its marketing business. “The thought of Glencore’s marketing team applying their skill set to the Rio asset base is exciting,” says David Butler, analyst at Barclays, who also sees tax and debt synergies from a deal.

For Rio investors, iron ore has provided up to 90% of group earnings, but its price is at a five-year low. A merger with Glencore would offer a way to diversify: it is estimated that iron ore would be only 34% of the combined group’s earnings.

Succession planning
Then there is the question of succession planning at Rio. The contract of Sam Walsh, chief executive, is due to expire at the end of 2015, with no replacement identified.

However, there are many reasons for Rio shareholders to question the benefits of a merger with Glencore.

Neither would the different company cultures be easy to reconcile. Rio prides itself on its exploration skills – and is full of “geeky engineers”, according to one company insider – whereas Glencore’s trading heritage has fostered a freewheeling esprit de corps, with little appetite for embarking on big mine-building projects. “I would imagine the culture clash between Glencore and Rio to be immense and a major threat to the success of a deal,” says Peter Mallin-Jones, analyst at Canaccord Genuity.

A merger would require not only the blessing of Chinalco – the Chinese aluminium producer that is Rio’s largest shareholder – but also Beijing, which is increasingly taking national interest and industrial policy into account when considering deals.

Rio believes its best course is to maintain what it has tried since Mr Walsh succeeded Tom Albanese last year after the miner’s misjudged investments: spend less shareholders’ money, do so wisely, and give back as much as it can.
More than ever – and even amid the weak iron ore price – the onus is on Rio to deliver an extra return of capital when it reports full-year results in February. Anything else would encourage thoughts about whether a combined GlenTinto could do any better.

“If Rio management does not deliver material capital returns to shareholders, as promised, or if the iron ore price sharply falls next year, Rio could become much more vulnerable to a bid from Glencore, especially if the bid includes a premium,” says Chris LaFemina, analyst at Jefferies. “Rio shareholders are patient, but management mistakes and/or iron ore price weakness can make them impatient.”