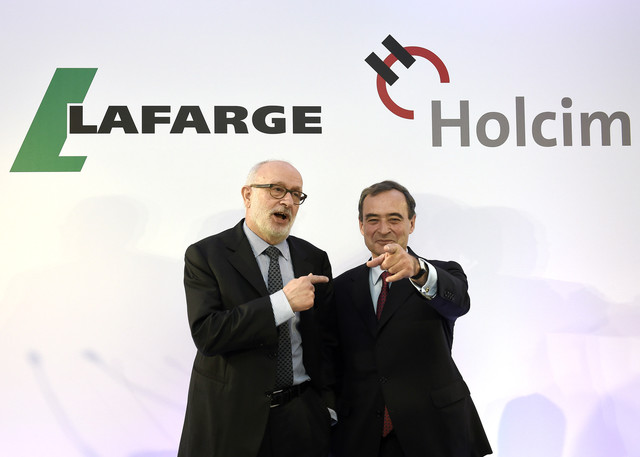 The world’s two largest cement makers, France’s Lafarge and Holcim of Switzerland, have agreed to the terms of a merger that would create a company with a market value of around $55-billion (U.S.), a source close to the deal said on Sunday.

Such a merger, achieved by Holcim buying Lafarge, would be the industry’s biggest-ever tie-up and create an entity with combined sales of over $40-billion, raising the likelihood it will draw extra scrutiny from global competition watchdogs.

The boards of Lafarge and Holcim approved the proposal on Saturday and are due to announce it on Monday, the source said. The two groups have already begun to address possible competition concerns that would arise, the source added.

“The boards met yesterday and approved the proposal,” the source said. “An official communication is due on Monday.”

Lafarge declined to comment. Holcim was not immediately available for comment. Both firms are likely to be counting on support from major shareholders. More than a third of Lafarge stock is own by two investors who are represented on its board.

The two companies had already issued statements on Friday announcing they were in advanced talks to merge, a deal which would help them slash costs, trim debt and better cope with the soaring energy prices and weaker demand that have hurt the sector since the 2008 economic crisis.

Their share-price levels jumped to four-year highs on the news, lifting the entire cement sector. A merger would take out spare capacity and help consolidate the market, analysts said.

The terms of the transaction, reported by French newspaper Le Figaro and confirmed by the source, will see Holcim launch a public takeover for Lafarge payable in shares. If successful, the combined firm will be based in Switzerland but will have operational headquarters in Switzerland and France.

Lafarge Chief Executive Officer Bruno Lafont will become CEO of the combined entity, while the chairman will be Swiss.

Investment-bank Rothschild and boutique firm Zaoui & Co – helmed by veteran deal-making brothers Michael and Yoel Zaoui – are advising Lafarge, while Goldman Sachs is advising Holcim, according to two sources close to the deal.

Holcim and Lafarge are close in size, with the former’s market capitalisation at $30-billion and the latter’s at $25-billion. They each have an enterprise value – which includes debt as well as equity – at around 10 times earnings before interest, tax, depreciation and amortisation (EBITDA).

However, in share-price terms, Lafarge enjoys a more expensive valuation with a price-to-earnings ratio of around 33 versus Holcim’s 20.5, according to Reuters data. Lafarge’s stock is up 18 per cent this year. Holcim’s is up around 20 per cent.

Both companies have high-profile billionaire backers, according to data compiled by Thomson Reuters.

Switzerland’s Thomas Schmidheiny and Filaret Galchev from Russia control a total of 31 per cent of Holcim, while Lafarge’s two biggest shareholders are Groupe Bruxelles Lambert – holding company of Belgium’s Albert Frere – and Egyptian tycoon Nassef Sawiris. The Thomson Reuters data show GBL and Sawiris own a total of 37 per cent of the French firm.

Any deal is likely to draw scrutiny from global competition watchdogs, as a Lafarge-Holcim combination would have a dominant position in both Europe and the United States.

Both companies have significant and overlapping capacity in countries such as France, Germany, Spain, the Czech Republic, Romania and Serbia, according to Morningstar analyst Elizabeth Collins.

Analysts have also pointed to Canada and Brazil as other markets where the new entity would have a dominant position.

The companies are already working to address possible antitrust concerns, the source said, without elaborating.

Regulators would probably require the companies to shed some cement plants and distribution facilities before approving any merger.

Lafarge’s 2013 merger with Tarmac, Anglo American’s British business, was approved by British antitrust authorities only after both agreed to sell a significant number of assets.

Holcim and Mexican rival Cemex also announced plans in August to exchange some assets and combine others in Europe. European Union antitrust regulators are investigating aspects of the deal and whether it will reduce competition and result in higher prices for consumers.

A merger could put pressure on major global competitors such as Cemex as well as Germany’s Heidelbergcement and Anhui Conch Cement of China.

The merger plan comes after both Lafarge and Holcim took on debt in the past decade to expand in emerging markets, where rapid urbanisation has fed demand for building materials.

Then the U.S. housing bubble burst, Europe sank into a sovereign debt crisis and demand collapsed. Lafarge suffered further when the unrest of the Arab Spring held back the very markets it had banked on with its $12-billion takeover of Egypt’s Orascom Cement in 2008.

Meanwhile, energy prices spiked and many plants in the power-hungry industry are now running at a loss or well below their capacity.

Lafarge, whose cement helped build the Suez Canal and Hitler’s Atlantic Wall bunkers along France’s west coast, employs around 65,000 workers in 64 countries. Holcim, which was founded in 1912, now has about 71,000 employees in 70 countries.

Since the economic crisis, Lafarge and Holcim have both embarked on cost-cutting drives and shed assets to trim debt.

Some analysts said a merger would help Lafarge potentially almost halve its fixed and variable costs, as Holcim has a better credit rating than Lafarge and the group as a whole could benefit from lower borrowing costs.

Lafarge, whose debt is rated as junk by Standard & Poor’s and Moody’s, aims to regain an investment grade this year.
By Lionel Laurent

Source: The globe and mail

SWIZA, More than 100 years of experience